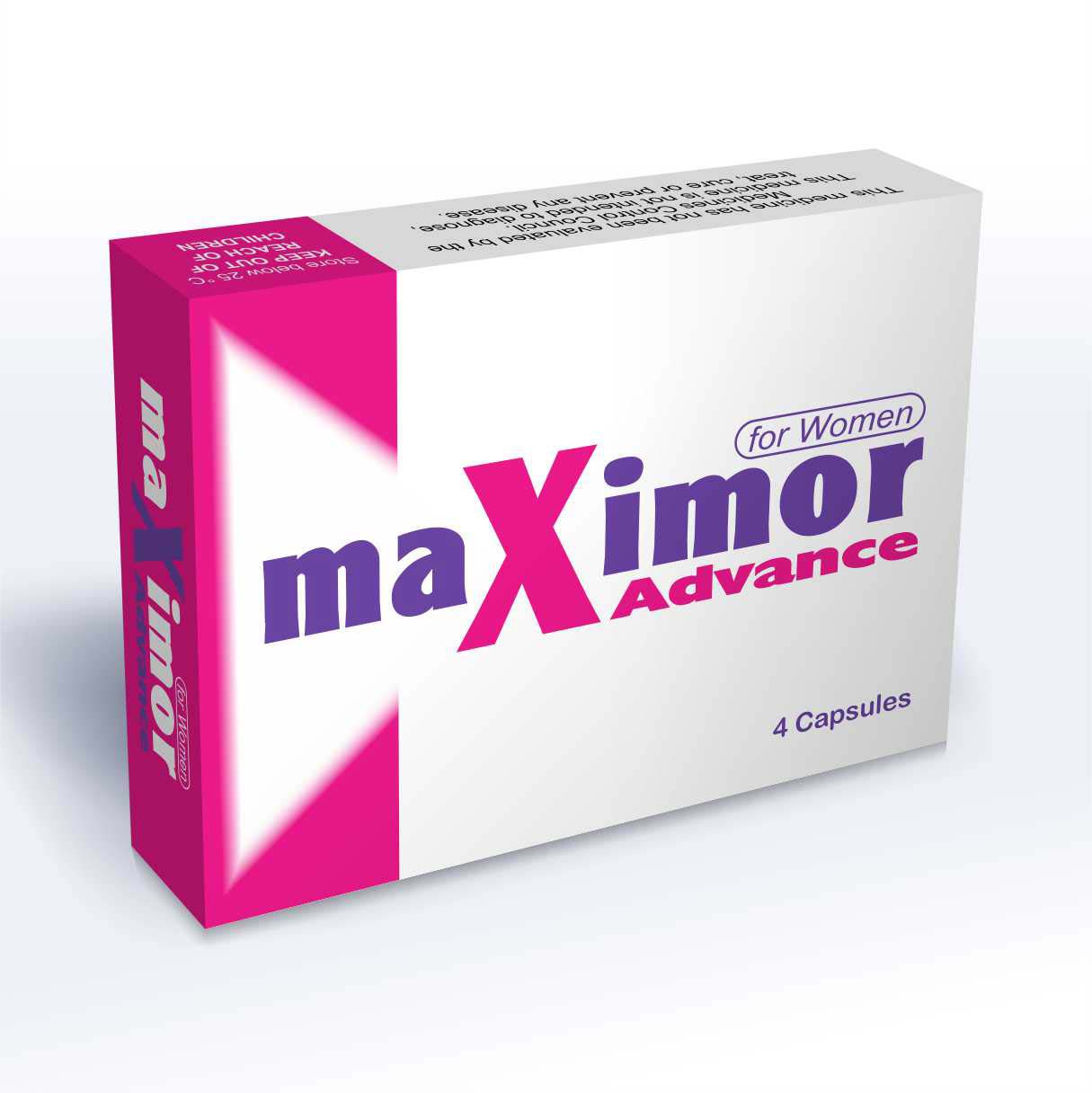 Sexual dysfunction in women manifests as one or more of a range of symptoms that may be periodic or persistent, recurring problems. These include reduced sex drive, aversion to sex, lack of arousal, vaginal dryness, pain during sex and the inability to feel pleasure or reach orgasm. Physiological changes, especially those that affect the reproductive system, such as menopause, can trigger these symptoms.

Although the incidence of female sexual dysfunction increases with age, it is not an inevitable symptom of aging and can affect women of any age.

Benefits of Maximor Advance for Women:

Maximor Advance for Women starts working after consuming 1 to 2 capsules two hours before an expected sexual encounter. There is no need to stress about timing, love making or killing the moment due to lack of desire or arousal; one tablet lasts for 12 – 24 hours. Do not exceed more than 2 capsules within 24 hours. If a faster response is needed, open the capsule and take the powder with water (preferably warm water).

If you are taking prescription medication or under a physician’s care for any medical condition, consult your physician before using this product. It is recommended that you consult your healthcare practitioner for professional advice before long term use.

Maximor for Woman is easy to obtain without prescription from pharmacies nationwide or discreetly online.

Isoflavones in extracts of Glycine max are one of the most commonly used phytoestrogens. Research suggests that these isoflavones may help reduce various menopausal symptoms, particularly the frequency and severity of hot flushes. It is beneficial in the management of a range of health problems including high blood pressure and traditionally used to relieve vaginal inflammation.

Extracts of this rare mushroom have been used traditionally for centuries to treat fatigue and sexual dysfunction in both men and women. Energy and sexual function go hand-in-hand and Cordyceps is known to boost both. Research suggests that Cordyceps may boost oxygen uptake during exercise, helping the body work more efficiently. Cordyceps is also commonly used to enhance kidney function, invigorate the lungs, improve respiratory health and promote general strength.

Also known as Kudzu, this herb is traditionally used as a herbal remedy for menopausal symptoms, as well as an ingredient in preparations for conditions affecting menopausal women, such as osteoporosis, coronary heart disease, and some hormone-dependent cancers. It has also been used to increase libido and aid weight loss. The scientific basis for its action may be its action as a phytoestrogen.

Rhodiola rosea has a long history of use and it has been studied extensively. Its anti-stress and fatigue-fighting properties make it one of the most popular botanicals in all of Siberia. The root is traditionally used to promote energy, endurance and stamina. It has also enjoyed a very long history for improving mental performance and promoting sexual health in women.

Wild yam is often promoted as a natural alterative to estrogen therapy and has long been used for its benefits in women’s reproductive health including premenstrual syndrome, menstrual cramps and to alleviate symptoms of menopause such as vaginal dryness. It is also commonly used to increase energy and sexual drive in both men and women. Wild Yam can be very beneficial for nervousness, restlessness and other nervous conditions.

Astragalus is generally cardio-protective and has been successfully used as a herbal remedy for high blood pressure. The root has excellent anti-inflammatory properties and is useful in reducing the severity of inflammatory conditions and protects against the damage caused by chronic inflammation. This property promotes faster healing of wounds and infections by limiting the inflammatory response.

Angelica has been called “female ginseng” due to its properties that made it a popular cure for female-related health issues. The plant has been used for menstrual cramps, anaemia associated with menstruation, premenstrual syndrome (PMS), pelvic pain, recovery from childbirth and fatigue. Angelica is also used in both men and women for heart conditions, high blood pressure, inflammation, headache, infections and nerve pain.

Stimulates digestion and helps make the nutrients more available and accessible to the body thereby maximizing the efficiency of those nutrients.

Vigor-X Plus for Men
Scroll to top